I report the post of  Maryan Ismail , Italian-Somali anthropologist president of the Italian Islamic Union because she explains very well what happened in Milan on New Year's Eve to 9 *** in Piazza Duomo, in the crowd and in front of the police.
How did they do it without being seen and stopped? It is a well known and tested technique, already used in other European cities such as Cologne a few years ago.

“Just as we were rightly alarmed and indignant at the slap on the butt live on the journalist Greta Beccaglia, just as much and even more concern arouses what happened in Piazza del Duomo on New Year's Eve.

Looking at the videos that run on the web it is clear that they were real Taharrush Jama'i (assaults and sexual assaults).
The victims would be at least 9 and the alleged attackers under investigation are young and very young foreigners and Italians with parents of North African origin. It is no coincidence that the videos are shot on Arabic-language social networks. If they are responsible, they must not have cultural extenuating circumstances, but be tried for group sexual violence.

To understand that it was Taharrush Jam'i you need to know how the attacks take place. The victims, as in other previous cases, were isolated and attacked with precise actions, which involves the formation of 3 tight circles of men and / or boys.
The first is the one who physically rapes the girl. The second circle films, photographs and enjoys the show, finally the third circle distracts the nearby crowd with screams and noises so as not to make them understand what is happening.
The most hateful task is carried out by one or two males of the first circle who pretend to be "protectors and saviors" and who reassure the victim by convincing her that they are there to *** her (in the video with the German *** you can see two young *** who "try" to push them outside the barriers), but then they themselves actively participate in group violence. The protection technique has the purpose of disorienting the girl and breaking her resistance because she no longer knows who to trust. Thus he also suffers a further and dramatic psychological torture.

It is good to know that the victim suffers groping, undressing, beating, biting, digital or foreign body penetration and if there are time conditions, real sexual violence.

The phenomenon exploded in Egypt in 2011 during the fall of Mubarak and was well documented by CBS journalist Lara Logan, the victim of an assault in Tahrir Square while carrying out a television report.

Since then, even if with great difficulty, other testimonies of victims have been collected and a series of precautions and protection have been put in place for women who may be exposed to group violence in the circumstances of public events, gatherings, concerts or religious festivals .

None are safe. Women with or without the veil, of any religion or origin and of all ages (from 7 to 70) are attacked.

In the Arab-Islamic world, the problem is addressed at all levels, without hiding that it is specifically cultural. These are further forms of misogynist, patriarchal and male chauvinistic deviance.
The meaning of this specific gender-based violence is the domination and control over women. These are aspects that are not hidden or justified.
Now this terrible phenomenon lands in Europe and beyond (there have been cases in India, Pakistan, Indonesia, etc.).

We saw it happen in Cologne and at the beginning of the year it also scarred our Milan and its towns.
Tackling this new form of violence without diminishing its importance and specificity for fear of being Islamophobic or racist is urgent and necessary for the safety of all of us.
It will be useful to put aside the ideologies of the case and work together. Law enforcement agencies, institutions and families.

There is no need to hire more brigade, army or policemen (how much longer do we have to wait?), But to implement an urgent and serious intervention program in the suburbs, schools, parishes, counseling centers, clinics, stadiums and centers of aggregation. In other words, rethink the control of the territory with an ex ante / ex post vision of prevention and protection.

Women, ***, young ***, social cohesion, integration, positive citizenship and dialogue between communities or between religions are in serious danger.
And it is good not to pretend nothing has happened, hoping that after the moment everything returns as before. This is not the case and there are now many alarm bells. " 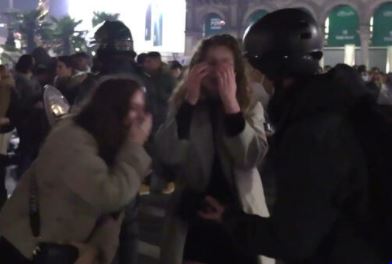 This article is amazing, thank you for sharing.